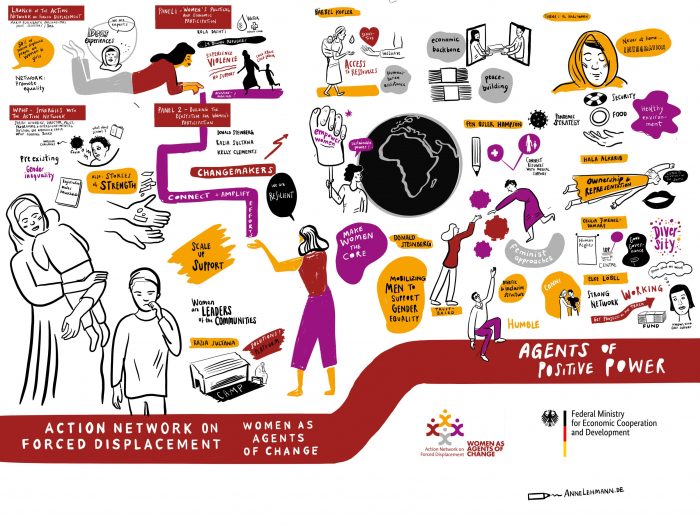 WRMC President Fen Osler Hampson spoke at the launch of the Action Network for the Forcibly Displaced — Women as Agents of Change on 27 October 2020. The new network is a direct result of the Council’s call for a Global Action Network on Forced Displacement in A Call to Action: Transforming the Global Refugee System.

The event was hosted by the German Federal Ministry for Economic Cooperation and Development under the patronage of the Parliamentary State Secretary, Dr. Maria Flachsbarthand. Sarah Hendriks delivered an official statement from the United Nations Women’s Peace & Humanitarian Fund and the event was moderated by Yasmin Kumi, Founder & CEO of the Africa Foresight Group.

It is a system that suffers more than ever from a need for political will and leadership, responsibility sharing to support countries hosting the forcibly displaced, new governance approaches, innovative financing and mechanisms to hold corrupt leaders to account for the humanitarian crises they cause.

Our “Call to Action” report ended with the most important recommendation of all: that a Global Action Network for the Forcibly Displaced must be developed to move the actions forward.

We called for a series of networks to be formed under the Global Action Network umbrella that would bring together global women leaders, national and regional government leaders, multinational organizations, civil society and private sector business interests and, importantly, refugees and others who have been forcibly displaced.

In fact, we called for exactly what is being launched today. Which is why I’m proud to be representing the World Refugee & Migration Council as a partner in this excellent initiative.

As we noted last year, “The capacity of women to be agents of change in addressing refugee issues has been largely overlooked in government responses. This wasting of potential is particularly evident in the scant attention paid to providing education for displaced women and youth.”

“One answer is that women and youth, when given the chance to lead, will provide solutions.”

Refugee women and girls must be part of the solution. Our work already with refugee leaders, including with our partners at GIRWL – the Global Independent Refugee Women Leaders network – has clearly demonstrated that refugees themselves best understand their needs and that they need to be empowered with tools and support.

So what can and should this network achieve: