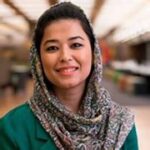 At 10 years old, Najeeba Wazefadost fled Afghanistan with her parents. She sought asylum from Australia by sea in September 2000. She spent several months in mandatory immigration detention before being recognized as a refugee. Arriving with no knowledge of English, by the age of 14, Najeeba had mastered it well-enough to win a national essay-writing competition, and start the advocacy journey. She has graduated from a Bachelor of Medical Science . Najeeba has been actively involved in the development of refugee-led networks at both the regional and global level, which focuses on bringing together refugee-led organizations and refugee change-makers from around the world to gather to discuss their lived experiences and propose solutions for more effective and sustainable refugee policy. Najeeba sits on the Steering Committee for the Global Refugee-led network and the co-founder for the Asia Pacific Network of Refugees which was established as a result of the planning and development of the Asia Pacific Summit of Refugees (APSOR) held in Bangkok this October 2018. Najeeba is the Chair of the Refugee Leadership and Participation Working Group as part of the Asia Pacific Refugee Rights Network (APRRN). She is the founder of an Afghan women business network in Asia Pacific, supporting women to establish their own businesses. Since her advocacy journey Najeeba has been awarded for her work a number of times: Human rights medal award, Local Citizen Award, Young Women of the west award and others. “Leaving your country is one of the most important decisions a human being can be forced to make.” And since December 2019, Najeeba is one of the co-founders of GIRWL Network.