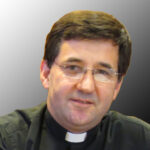 Fr. Leonir Chiarello, CS, is the Superior General of the Congregation of the Missionaries of Saint Charles, Scalabrinians, an international religious congregation serving migrants, refugees, seafarers and people on the move in 34 countries on five continents.  Fr. Chiarello is also member of the Congregation for Institutes of Consecrated Life and Societies of Apostolic Life, appointed by Pope Francis. He has joined the North and Central American Task Force as a co-chair with a special mandate to lead on the role of faith-based institutions in solutions to address the issues driving migration in Central America

Prior to this role, Fr. Leonir served as Executive Director of the Scalabrini International Migration Network (SIMN) and its permanent representative to the United Nations and other International Organizations, from 2006 to 2018. SIMN is an umbrella organization that encompasses more than 250 grassroots Scalabrinian entities that serve and advocate for the dignity and rights of migrants, refugees, internally displaced people, and seafarers worldwide.

Prior to directing SIMN, Fr. Leonir held a number of leadership positions in Latin America. From October 1996 to August 1997, he worked with migrant communities in Bahia Blanca, Argentina. From September 1997 to June 2006, he worked in Chile as Counselor (1998-2001) and Executive Vice-President (2001-2006) of the Episcopal Commission for Migrations of Chile (INCAMI) and Counselor of the Human Mobility Section of the Latin American Episcopal Council – CELAM (2003-2006). Fr. Leonir was the founder and director of the Center for Integral Attention of Migrants (CIAMI) of Santiago (2000-2006) and founder and first president of the Scalabrini Foundation and the Scalabrini NGO of Chile (2003-2006).

For his commitment to at-risk Peruvian migrants in Chile, Fr. Chiarello received from the President of Peru, Alain García Pérez, a Commendation Order of Merit for Distinguished Services, on July 12, 2007.